Quilting and patchwork: Birds and animals in textile art

The other day I fell across a photo of one of the most amazing historic quilts I’ve ever seen: the Homestead and the Forest cot quilt embroidered by Jane Morris, wife of William, and designed by their spectacularly accomplished daughter, May Morris.

Completed in the 1890s, the quilt depicts a little home surrounded by a large array of animals and birds, and a line from William Blake’s icon poem, Tiger, Tiger Burning Bright, along with other quotes and proverbs. Some of the animals are realistic; others seem, by accident or design, to follow the style of the famous French naive artist Henri Rousseau, who was a rising star at the time. 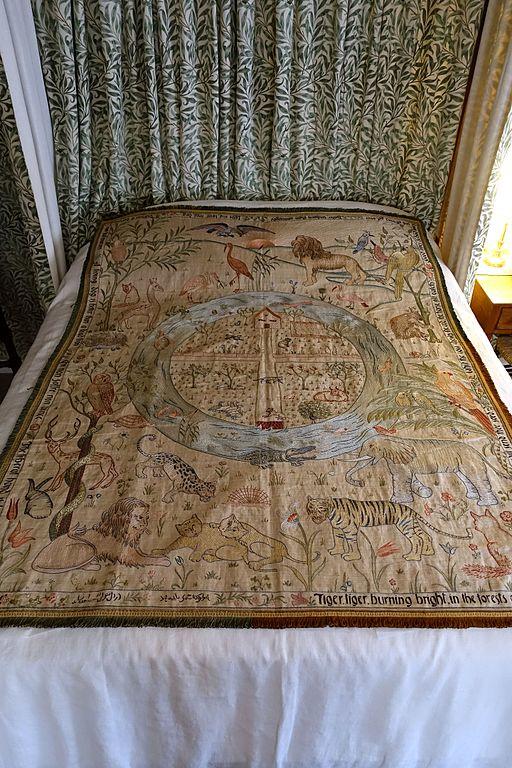 The quilt was acquired out of private ownership by The Society of Antiquaries of London in 2016 from the family of the late Mrs May Elliot Hobb – a tour de force of a woman who was variously a suffragette, concert pianist, member of an ambulance unit in the First World War and a Land Girl in World War Two - who saved the quilt from possible destruction in 1936 when she bought it at auction for the princely sum of £26.

The quilt is now back in its rightful place in Kelmscott Manor, the Cotswold home of William Morris and his family.

Nature and birds in fabric prints and design

For me, the Homestead and the Forest quilt is fascinating not only because it is an incredibly piece of the jigsaw that makes up the history of the Arts and Crafts Movement (my personal obsession) but also because it demonstrates how important animals, nature and especially birds, are in textile art and fabric design.

Now I am absolutely no quilter – or textile artist for that matter. In fact I am totally rubbish at it! I have tried, honest! But I just don’t have the patience or anything like the skill required. But I’m still a very big fan and think that anyone who can create and sew quilts or patchworks of any kind is a genius!

But seeing this quilt made me think about how frequently nature, animals and birds crop up in fabric designs and prints. Certainly when I’m sourcing fabric for the shop I’m inevitably drawn towards flora and fauna, especial birds fabric, trees, flowers and woodland animal fabric prints. So it also made me wonder how often animals and birds appear in historic quilts too.

I did a little bit of research and it seems that, especially in the mid-to-late 19th Century, they were quite common design motifs, and there are some fascinating examples out there including the following two stunning quilts from the 1800s:

The story goes that in 1987, an American author, Jane Rae, was researching for a book on British quilting and discovered a truly remarkable patchwork quilt in an attic in Scotland. It is the Rajah Quilt, named after the Rajah, a convict ship that sailed from Woolwich in England on 5 April 1841, bound for Australia, with 180 women prisoners on board.

The ship was also carrying sewing supplies including fabric, 24 hanks of coloured thread, 100 needles, thimbles and scissors donated by the British Ladies Society for the Reformation of Female Prisoners. During the three-month voyage, the women designed and created The Rajah Quilt. 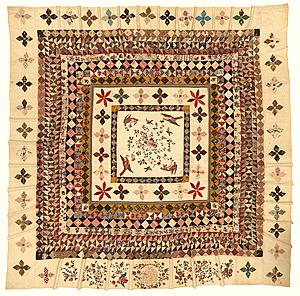 At the bottom of the quilt there is this inscription:

To the ladies of the convict ship committee, this quilt worked by the convicts of the ship Rajah during their voyage to van Dieman’s Land is presented as a testimony of the gratitude with which they remember their exertions for their welfare while in England and during their passage and also as a proof that they have not neglected the ladies kind admonitions of being industrious. — June 1841.

I think it’s probably no surprise that the centrepiece features seven flying birds; the symbols not just of freedom but also of journeys, and sometimes of transformation, peace and power. It is a beautiful and moving piece of textile art created by women under extreme pressure.

I admit that up until about two days ago I had never heard of Crazy Quilts. And I only discovered them by accident when, after looking at photos of about 15 ‘normal’ quilts on a museum website, I clicked down and a sudden madness of colour jumped right off the page!

After a bit more digging I found that crazy quilting was absolutely all the rage in late-1800s America; largely due to the 1876 Philadelphia Centennial Exposition, the first World’s Fair to be held in the US. It was an enormous event. More than 200 buildings were constructed on the site, including the huge Memorial Hall which still stands today in Fairmount Park.

But one building in particular changed everything: The Women's Pavilion, a project of the Women's Centennial Executive Committee, whose goal it was to improve women’s social and economic position in society, abolish unfair restrictions and empower them inside and outside the home. The Women’s Pavilion housed a huge range of exhibits on women’s contributions to society and culture including in the area of fine arts and crafts.

Of course, the Exposition pointed the spotlight directly at women in a society that was hungry for change, and it spawned new trends, new fashions, new ideas and the women’s magazines were happy to play their part, printing article after article promoting, amongst other things, the new fashion of crazy quilting. No surprise then that it took off like a rocket, and was still uber-cool 20-plus years later! In fact, you can see elements of the coming age of Art Deco in every quilt.

Lydia Finnell’s Star Quilt is a spectacular example of crazy quilting and I wish I could see it in real life. A star quilt design, it was created and sewn by Lydia of Harrodsburg, Kentucky, in 1899. It’s an absolute riot of colour and animals, birds, plants, flowers, feathers, wheat, even what looks like a wheelbarrow! I love it! 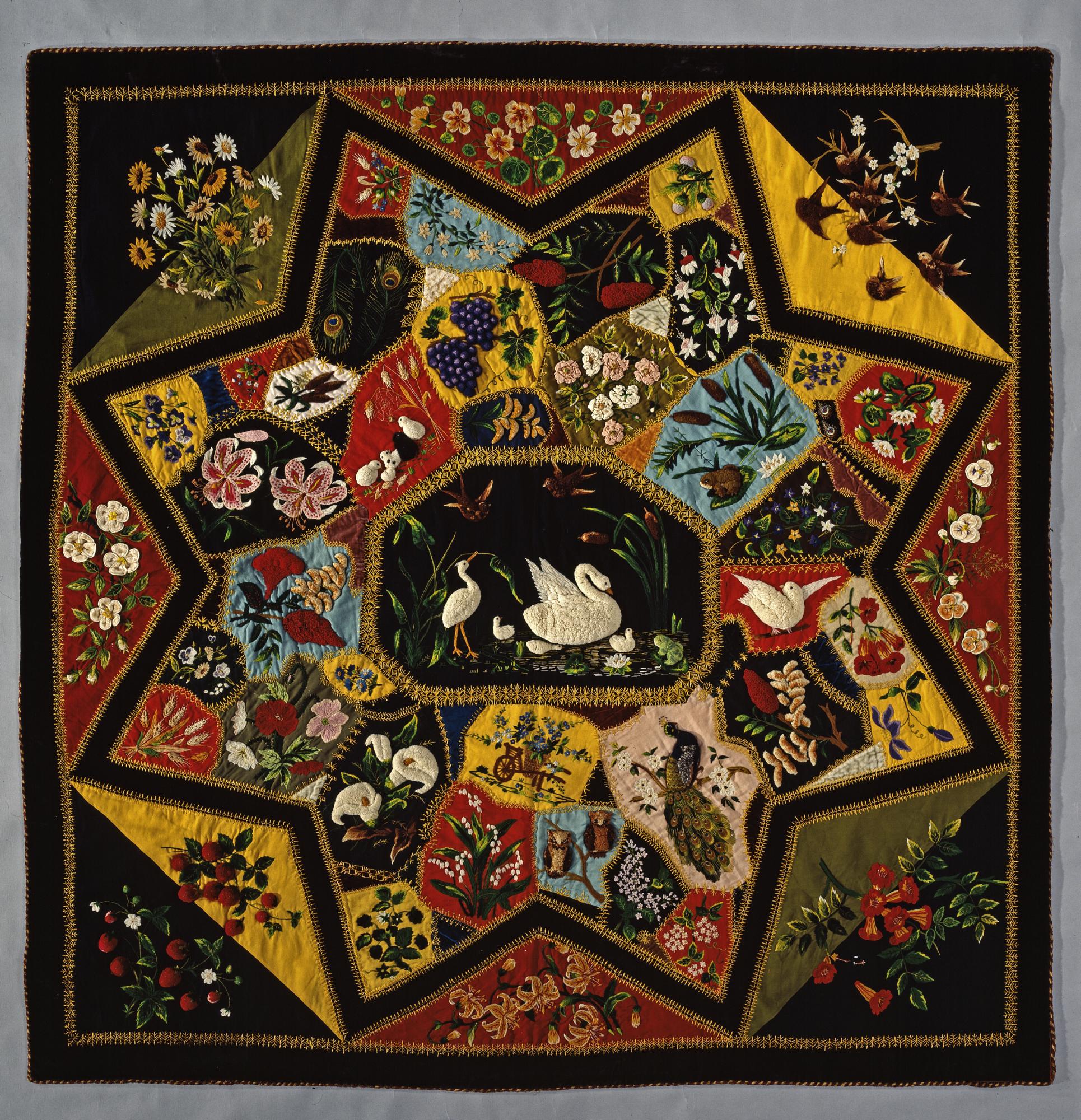 Lydia’s crazy quilt, and the others in this article, demonstrate yet again the hugely important role that nature, animals and birds play in helping us express ourselves creatively, and have helped women to create change along the way. Nature has played the same role and inspired generations of quilters and textile artists, and long may it continue to do so!